Drupal's editing interface can be unclear to novice editors, and the number of options may seem overwhelming to many. The Simplify module comes in handy here, as it allows you to limit the available functionalities to the necessary minimum, thus making website editing easier.

Further down the article I will present the module's capabilities and the effects of its operation.

The first version of the module was released in December 2010. Since then, it has been slowly but steadily developed. At the end of 2015, a stable 1.0 version for Drupal 8 was released.

According to official statistics, Simplify is used by over 15 thousand websites, however only 20% of this number are Drupal 8-based projects. The 7.x-3.x branch is currently by far the most popular.

The module has four maintainers, they are:

So far 72 commits have been created in the code repository. In addition to the developers mentioned above, several people have been involved in the project.

The module is used to simplify administration forms by hiding selected functionalities from the user. This makes it easier for those less proficient in the use of CMSs to edit pages and blocks.

After launching Simplify, select the elements that should be hidden from the user. Go to Configuration -> User interface -> Simplify in the administration menu and check out the list of options there.

The functionalities that can be disabled are divided into several categories according to the module that supports them. For example, try to disable all the "Nodes" type elements: 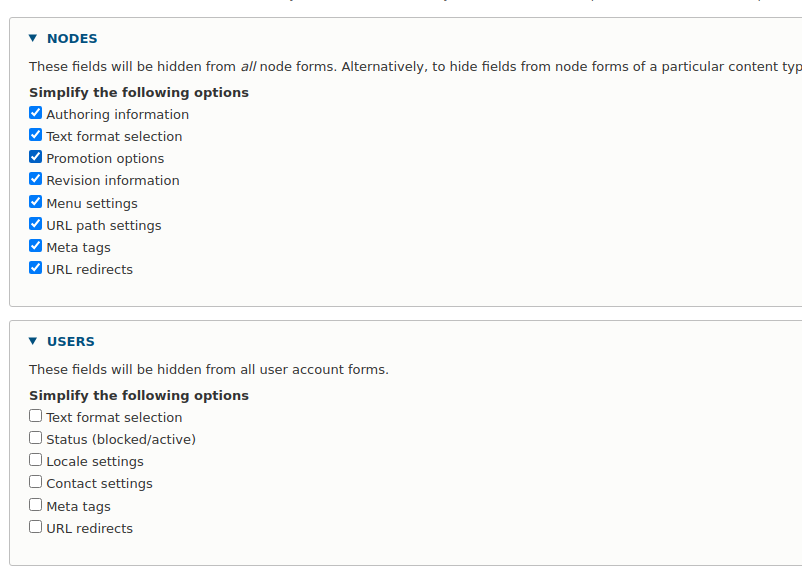 As a result, the users visiting the page editing form will see its significantly simplified version - without the author, text type selection, promotion and versioning.

As the administrator, you have the View hidden fields permission which ignores the changes made by Simplify. If you want to put administrators on an equal footing with all the registered users, check the Hide fields from admin users option.

By default, the Simplify module allows you to hide the editing elements of nodes, blocks, comments and taxonomies.

The module provides two hooks for adding your own exclusions to any form. Their use is very simple:

Simplify is a module that is simple by design but is a great help for novice editors. It is good to consider using it on corporate websites where the user may be overwhelmed by the number of options available. Referring to the experience of our Drupal agency in cooperation with clients, I recommend it, especially if you put a lot of emphasis on edit forms.

If you are interested in CMS optimisation, check out the article on 6 ways to improve editors' productivity.