In PHP we have several options for specifying strings, but most of us are only familiar with defining string literals using quotes. Sometimes, these strings are simple and we can use them as-is, but more often than not we need them to be dynamic, combined with different variables.

It’s important to have a good understanding of how you can combine string literals with any variable.

The most common approaches to adapt a string are to use:

We’re going to focus on each option, its strong and weak points. First, let’s dive into the theory.

With double quotes, the PHP compiler will expand every escaped variable inside a string literal.

Sprintf is the most powerful and advanced PHP string formatting function, giving you so many options to control the final result. It lets you format strings according to a special templating language and seems to be a much more powerful way to insert variables into them, with the biggest processing time cost though.

The sprintf function takes the string template as its first argument. Following that, there can be an indefinite amount of arguments. Sprintf will replace placeholders inside a string according to the arguments that you passed to the function.

A Here Document is defined as a section of a source code file that is treated as if it were a separate file.

Improved syntax (since PHP 7.3), makes us using heredoc in a more readable, much cleaner and less error-prone way. Heredoc lets you do something that’s harder to do with a quoted string literal. It lets you define a block of text as literal.

By default, PHP will process a heredoc like it would a double-quoted string literal, while nowdoc - a single quoted string. To use a nowdoc we just need to enclose the opening identifier in single quotes.

Let’s test each approach with a few examples.

We have to deal with a huge number of quotes, concatenation and extra spaces here.

Looks much better, just remember to escape variables, and special characters (“ in this case).

Alternatively, we can pass the variables as an array.

Same if we use the vsprintf function.

No escaping, no concatenations or extra quotes, no need to call functions, but 3 lines for a simple string.

Let’s say we want to add some markup with dynamic variables:

We would recommend using heredoc here:

In-string looks similar, but we need a bit more escape characters ‘\’ and {}.

Concating looks less readable, but thanks to formatting it is not annoying. But that’s not the main problem here:

Imagine we want to add a new dynamic variable to <p> tag, in heredoc syntax:

or in double quoted:

While for a single quoted case we need to find the right place before adding more concatenations and quotes. It is very easy to make a mistake:

And what’s about sprintf:

Passing a multi-line string doesn’t look great, unless you want to assign it to some variable first.

Also, remember to keep the number of variable placeholders low. Otherwise, you will have a maintenance nightmare with 10+ parameters, trying to add new %s, finding the position in the parameter list and add it to the sprintf call.

In the above example, if we want to add a new variable

right after the line-height we need to figure out that it is the third parameter and list it as an argument between $size and $text1. Doesn’t sound cool.
In this case you can try playing with ordered placeholders like %1$s, %2$s, additionally that placeholders can be repeated without adding more arguments in the code.

The initial setup for our test: 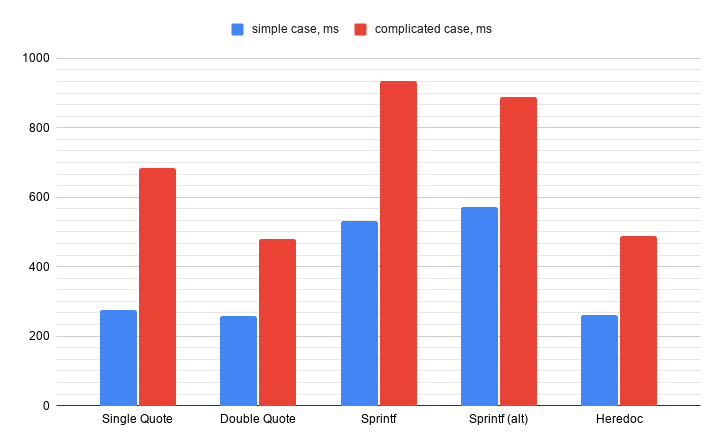 MYTH: Using “ is faster than ‘. PHP will not use additional processing to interpret what is inside the single quote, while inside double quotes PHP has to parse and check if there are any variables.

Today, the argument that one performs better than the other doesn’t hold any water, unless you start combining the string with variables, then the double-quotes method is definitely a winner here.

We find an in-string option the most usable method for combining the strings and variables. But general advice is to use each method for a certain scenario.

Here are the recommendations for each approach:

At Droptica, we have been providing PHP development services for over 10 years. This text is the result of experience gained. So if you have a project that requires expert PHP knowledge, feel free to contact us. 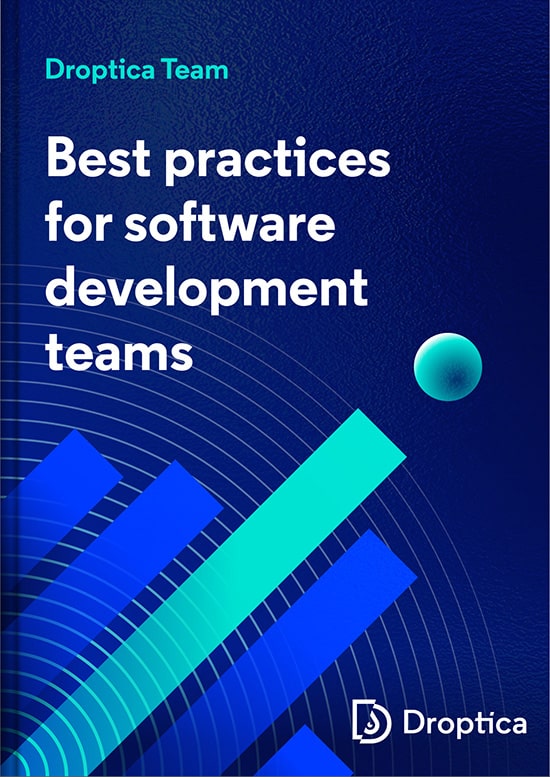 Why is it Good to Choose PHP? Interview with PHP Developers from Droptica