Creating groups of users with access to selected content is one of the frequent requirements set out in specifications for web portals. The Group module allows saving hundreds of programming hours by providing ready-made and easily extensible mechanisms. Check how many useful functions you can find in this module.

Group was created as an alternative to Organic Groups (OG), in which relationship mechanisms are based on fields and content. Created in the group module, on the other hand, were full-fledged entities with their own fields that can be extended and exported. Every group can have its own users or uniquely configured permissions.

The Group module is quite popular and is currently used by over 9,000 websites. The vast majority, about 8,200, are projects based on Drupal 8.

The main keeper of the module is Kristiaan Van den Eynde (kristiaanvandeneynde), responsible for almost 900 commits to the module. The module is financially supported by Factorial GmbH and has been supported by other companies and organisations in the past. Of course, the development of the module and its sub-modules is also supported by a large crowd of Drupal developers.

So far, 56 developers have contributed to the development of the module; the full list can be found here: https://www.drupal.org/node/711148/committers

The Group module solves a problem that cannot be solved in Drupal with the help of built-in mechanisms. It allows you to divide users into groups within which you can both manage user rights and create content dedicated only to the group members.

It is an extremely complex project from the programming point of view. It has several classes and functions that provide key functionalities like permission support, cache, or integration with Drupal's core modules. There is a gnode sub-module in the module's repository that allows you to create relationships between content and groups. The Group module can also be extended with the functionality of creating subgroups, and this is possible with the use of Subgroup or Subgroup (Graph) modules.

Examples of using it:

The Group is therefore a great tool that we use as part of Drupal services to create closed groups of users with access to specific content.

After installation, a new group will appear in the Groups (/admin/group) menu between the Configuration and Users tabs in the main system menu.

Group provides a new type of entity, so in the submenu, you will find links to pages such as group types or list. It also has a configuration page, where it is possible to set an administration skin for group-editing, group users pages, etc.

The Group module does not require any specific configuration to be able to use it.

In order to create groups, you must first define at least one group type. To do this, go to "/admin/group/types" and create a new group type. This process is similar to creating a new content type or a vocabulary, but also has additional configuration fields related to the permissions of users in given groups.

After creating the group type, you can configure the group fields, as well as the associated form and group display views.

In order to define the rights, you also have the option of going to the Permissions tab, under which you can define basic permissions broken down into:

Available is also an advanced configuration of the permissions of a user from outside the group with the use of system roles. 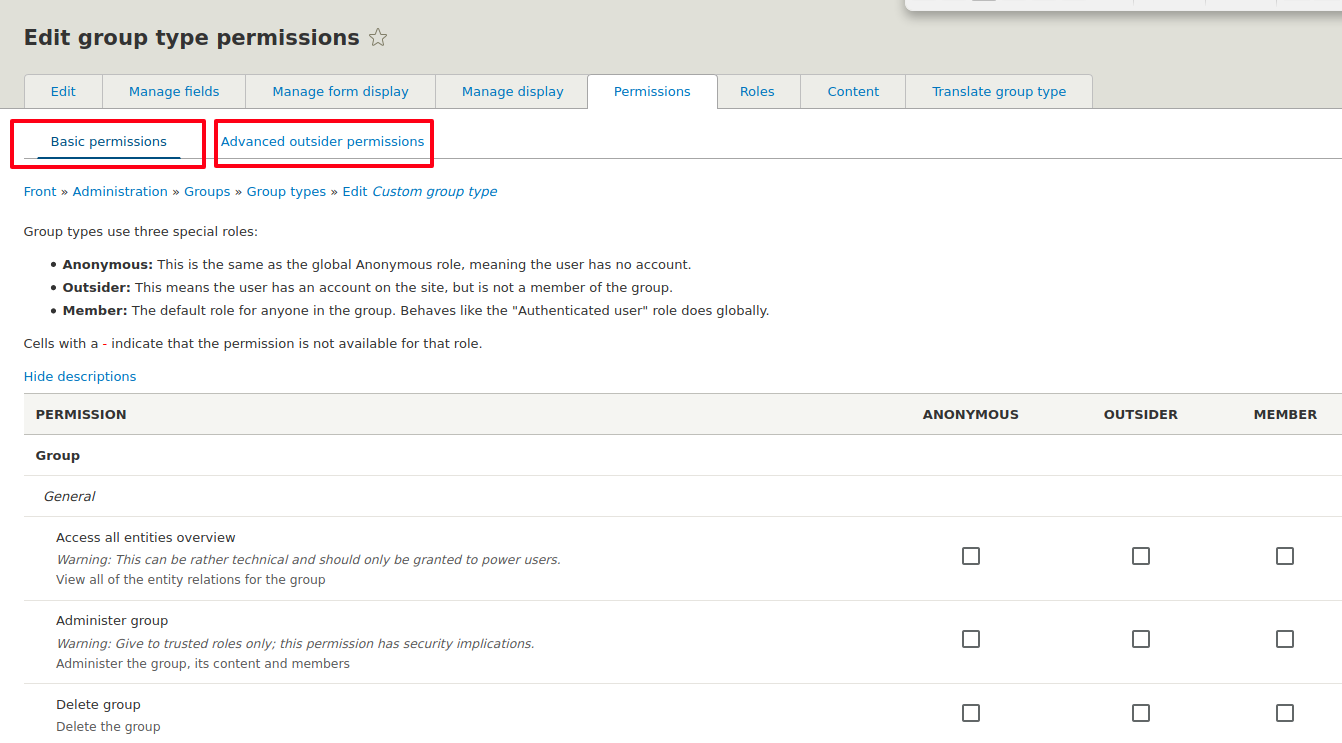 One of the most important tabs is Content, where you can install available extensions for a group, and these include content types, group membership or subgroups (after installing the previously mentioned modules).

After going through all the forms, creating new groups of as given type becomes very simple. You just go to the group list page (/admin/group) and add the groups you need.

As you can see, there are quite a lot of configuration options, especially regarding module permissions. However, they are necessary for its proper operation and it is easy to appreciate their advantages during the use of the module. You can find a very interesting application of the Group module in the Open Social distribution.

The module has the ability to modify links with entity operations embedded in a block on the group's website using the hook_group_operations_alter hook, which in its arguments accepts a table of links and a group object.

The Group module is very mature and programmatically complex. It adds a mechanism for creating groups and their related content that you cannot find in a clean CMS Drupal installation. It was written with due care for the high quality of the code, while at the same time ensuring its easy extension with new functionalities. If this module fits the needs of your project, our Drupal consultants recommend to use it without hesitation.